Recording for Red Rose Speedway started in March 1972. The album was initially planned as a double album, and McCartney decided to include some unreleased songs that had originally been recorded during the Ram sessions prior to the formation of Wings. Two of those songs, “Get on the Right Thing” and “Little Lamb Dragonfly,” eventually appeared on the final album.

The album was cut down to a single album by McCartney due to a recommendation by Henry McCullough, as an attempt to release a more commercial and less expensive record. “Live and Let Die”, the title song to the James Bond film of the same name, was recorded during the sessions for this album, but would instead be released on the Live and Let Die soundtrack album. “I Would Only Smile”, which remains unreleased, was covered by Laine on a solo album. “Mama’s Little Girl” was recorded during the sessions and would later turn up as the B-side of the single “Put It There” in 1990.

In March 1973, “My Love” was released as the lead single for the album, and became a UK Top 10 hit at number 9, and US number 1 on the Billboard Hot 100 and Billboard Adult Contemporary charts. It raised expectations for the album, which shot to number 5 in the UK when it appeared and went to number 1 in the US. It featured a 12-page booklet stapled into the gatefold featuring pictures from the Wings tours. Its cover design—with the cover shot of a Harley-Davidson shovelhead engine by Linda McCartney—was by Eduardo Paolozzi, while the back cover of the album contains a Braille message of “We love ya baby” for Stevie Wonder.

Won’t say much about the album ‘cept I love it enough to have started videos for several songs (notice in my video for “Little Lamb Dragonfly” I mentioned a couple of others I was plugging away on at the time….can’t even really remember what I’d started for those, and I’m afraid to look! LOL!). I’m sure I’ll get around to more Red Rose Speedway goodness soon enough, but a quick “My Love” was too hard to resist…a long time favorite that was takes me right back the sunny summer of 1973, when it battled the airwaves with George’s “Give Me Love (Give Me Peace on Earth)”….man, they sounded great together on the AM radio and I always imagined them as new tracks from The Beatles new record!?!?! I hope you enjoy the result. Thanks as always for checking the vids!

[Lyrics]
And when I go away
I know my heart can stay with my love
It’s understood, it’s in the hands of my love
And my love does it good

Don’t ever ask me why
Lord, I never say goodbye to my love
It’s understood, it’s everywhere with my love
And my love, she does it good

Oh, I love, oh, my love
Only my love does it good to me 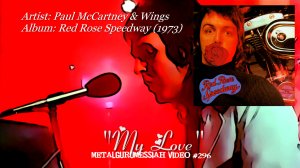 “Stand By Me” was released on John Lennon’s sixth solo album, Rock ‘N’ Roll, in February of 1975.

Wanted to edit John’s performance on The Old Grey Whistle Test to the remastered track…the original vid is amazing as John is having a great time taking the opportunity during non vocal portions to talk to the audience a bit during the last part of the song and basically just John being John. I edited those sections out to match the feel of the performance to the studio track, There were maybe a couple places where I might have improved the lip-sync, not too bad though…considering how tough John made it to match up! 🙂 As always thanks for watching and I hope you enjoy the vid!

****From Wiki:
Recording the album was problematic and spanned an entire year: Phil Spector produced sessions in October 1973 at A&M Studios, and Lennon produced sessions in October 1974 at Record Plant Studios (East). Lennon was being sued by Morris Levy over copyright infringement of one line in his song “Come Together”. As part of an agreement, Lennon had to include three Levy-owned songs on Rock ‘n’ Roll. Spector ran away with the session recordings, later being involved in a motor accident, which left the album’s tracks unrecoverable until the beginning of the Walls and Bridges sessions. With Walls and Bridges coming out first, featuring one Levy-owned song, Levy sued Lennon expecting to see Lennon’s Rock ‘n’ Roll album.

The album was released in February 1975, reaching number 6 in both the United Kingdom and the United States, later being certified gold in both countries. The album was supported by the single “Stand by Me”, which peaked at number 20 in the US, and 30 in the UK. The album was Lennon’s last until 1980; he took a hiatus from recording to raise his son, Sean Lennon.

Although some critics derided the album as “a step backward”, The Rolling Stone Album Guide wrote that “John lends dignity to these classics; his singing is tender, convincing, and fond.” AllMusic described the album “as a peak in [Lennon’s] post-Imagine catalog: an album that catches him with nothing to prove and no need to try”.

The album was released on 17 February 1975 in the US, and a few days later in the UK, on 21 February 1975. It reached number 6 in both the United Kingdom and the United States. On 10 March and 18 April 1975, in the US and UK respectively, “Stand by Me” was released as a single, backed with “Move Over Ms. L”, a song that was meant to appear on Walls and Bridges but cut from the final line-up. Peaking at 20 number in the US and number 30 in the UK Lennon promoted the song by appearing on the BBC TV show Old Grey Whistle Test, which also featured an interview by Bob Harris. A second single, “Slippin N Slidin”/”Ain’t That a Shame” (Apple 1883), was announced, promotional copies were pressed, but was never released. “Ya Ya”, backed with “Be-Bop-A-Lula”, was released as a single only in Germany, peaking at number 47 on the Media Control Charts. Lennon said the following about Rock ‘n’ Roll: “It started in ’73 with Phil and fell apart. I ended up as part of mad, drunk scenes in Los Angeles and I finally finished it off on me own. And there was still problems with it up to the minute it came out. I can’t begin to say, it’s just barmy, there’s a jinx on that album.”

Lennon planned to use some of his childhood drawings for the cover of his oldies album, and production had already begun when Lennon switched gears, so the artwork was used instead for Walls and Bridges. In September 1974, May Pang attended the first Beatlefest convention at Lennon’s behest, and met Jürgen Vollmer, an old friend of the Beatles from Hamburg, Germany, who had photographed the band from their Hamburg days. He was selling some striking portraits, and Pang immediately phoned Lennon to tell him of her find. Reuniting with Vollmer in New York, Lennon chose one of his photos for the album’s cover.

The photo depicts Lennon in a doorway with three blurry figures walking past him in the foreground. Those figures are Paul McCartney, George Harrison and Stu Sutcliffe.

As always HUGE THANKS to everyone who’s art contributed to this new art…THANK YOU!!!! And THANK YOU for watching!

If the sky that we look upon
Should tumble and fall
And the mountains should crumble to the sea
I won’t cry, I won’t cry, no I won’t shed a tear
Just as long as you stand, stand by me