“A Fool For Love” was released on Bryan Ferry’s eleventh studio album Frantic, on Virgin Records in April 2002. The majority of tracks were produced by the team of Rhett Davies, Colin Good, and Bryan Ferry; David A. Stewart and Robin Trower also co-produced several tracks.

This is an update for another of my really ancient original videos. The plan was for a quick n easy update for a video that wasn’t too awful (as the early ones go) to begin with, mainly as an excuse to use a really great 96 KHz/24 bit FLAC from a vinyl needle drop….the most gloriously sounding version of this glorious track that I could find (I also have the album on the hard to find DVD-Audio) but this one sourced from vinyl really does bring the warmth and depth of the vinyl recording.

As with my updates, the goal was to try and update the original image, video and audio elements with higher quality/higher resolution files….and as usual, I ended up going a bit overboard on the thing. Definitely this is an epic tune that deserves an epic video….maybe just not quite THIS epic? LOL! All I really need is a good editor to help me dial it down, because while my brain is telling me “less is more” my heart is saying “forget that,….MORE IS MORE!” 😉 😉 Whatevs…if you know the tune I hope you enjoy the presentation…..and if you don’t know the tune, I hope the presentation opens it up and helps it become one of your new favorites! Thanks to my old friends for sticking around with me….and thanks to any newbies that might find and watch the vid.

Reviewing for AllMusic critic, Tim DiGravina wrote of the album “Some listeners might suggest that an album this varied has an identity crisis, but with [these] standout tracks as glorious as the Dylan covers and the Eno closer, Frantic is a fascinating addition to Bryan Ferry’s accomplished discography.” And reviewing for PopMatters critic, David Medsker wrote of the album “Frantic may play like a greatest hits album, with bits here recalling Boys and Girls and songs there echoing late Roxy, and it may rank in the middle to upper of the pack of his overall body of work. But it’s the most cohesive album he’s done in ages. Given how down and out he appeared to be, the fact that Frantic is more than half good is cause for joy.”

Frantic manages to touch upon virtually every musical style of Bryan Ferry’s career. Ferry has proved to be as interested in covering other artists’ material as penning original songs, and he straddles a smart mix of originals and covers here. Two brilliant Bob Dylan songs appear among the opening tracks: “It’s All Over Now Baby Blue” sees a return to the eclectic, energetic experimentation of Ferry’s early albums with Roxy Music as a lush modern swirl of instruments mingles with the singer’s stylized vocals and throwback harmonica; “Don’t Think Twice It’s Alright” completes the Dylan pair, as Ferry intones with confidence and again takes up harmonica over Colin Good’s rolling piano. The reverent Leadbelly cover “Goodnight Irene” reimagines Ferry as a kind of blues troubadour. “One Way Love” sees the Drifters’ song reworked as a squall of distorted guitars and keyboards. Almost half of Frantic’s songs originated from late-’90s sessions with Eurythmics’ Dave Stewart, and Stewart is given a co-writer credit for these songs. Though the Stewart songs tend to favor edginess over songwriting, a few of them manage to break through the bombast. “Goddess of Love” is probably the best song about Marilyn Monroe since Kitchens of Distinction’s “When in Heaven,” and there’s a passing musical resemblance to that great song. “Hiroshima” works like an ominous take on Roxy Music’s synth-heavy Avalon period, with raging guitar dynamics contributed by Radiohead’s Jonny Greenwood. Roxy Music fans will find more reasons to rejoice with the superb album closer, “I Thought,” which was co-written with Brian Eno, who sings backing vocals and plays keyboards. Some listeners might suggest that an album this varied has an identity crisis, but with standout tracks as glorious as the Dylan covers and the Eno closer, Frantic is a fascinating addition to Bryan Ferry’s accomplished discography.

“Running Wild” was released in May of 1980 on Roxy Music’s seventh studio album, Flesh + Blood.

This was the second Roxy Music album I ever owned (Roxy Music was one of the bands that I always read about in the rock and roll magazines I read, but I’d somehow never gotten into them until I came across the Manifesto album in 1979 and finally, based on the cool cover and desire to finally check out what Roxy Music was all about). Manifesto was like nothing I’d heard and one of those records that I played very often late at night when I most favored the stranger, deeper, denser things. The first few times I listened to Manifesto, it left me pretty cold, but it was definitely a grower and I ended up a huge fan of that record.

I was thrilled to find Flesh + Blood on the shelves the next year, and of course it was met with some pretty high expectations after Manifesto. It was a huge letdown for me initially, but just as with Manifesto, it took repeated listens for it to open up to me where I began to really enjoy it….I think one of the things that let me down was that there were two covers (I hated to see covers on albums by my favorite bands because of course that meant less originals)….but it’s got some really strong and beautiful tracks on it and I like it much more than I used to.

I know I’m guilty of committing a kind of sacrilege among many serious Roxy Music fans (similar to the sacrilege I commit with some hardcore Genesis fans by stating my favorite Genesis albums are three mid period records and not the more acclaimed early stuff), but since I started my listening experience with Roxy Music during the albums from Manifesto (’79), Flesh + Blood (’80) and Avalon (’82), these albums always resonate with me more than the more classic (and astonishing! absolutely!) earlier Roxy Music albums.

As usual HUGE THANKS to everyone who’s art made this new art possible…especially the creators of the various amazing horse clips (no idea of the source of each)….check out wittydud’s amazing channel for more: https://www.youtube.com/user/wittydud …..thanks all!

[Lyrics]
There’s that melody again
Burning through my head it does me in
Turns me right around to my old friend
Wonder how you’ve changed, are you still

Running wild, like you do
When all your dreams come true
Happy days you pretend
That your love will never end
There’s that melody again

Where it’s coming from I must have been
Drifting out of time, now I’m in
Underneath you’ll find I’m just the same
Running wild, like you do
When all your dreams fall through 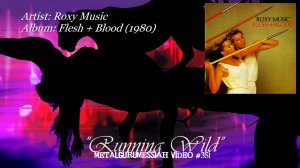 “The Main Thing” was my very favorite track on Roxy Music’s eighth and final album, Avalon, from the spring of 1982. It was recorded in 1981–82 at Compass Point Studios in Nassau, Bahamas, and is generally regarded as the culmination of the smoother, more adult-oriented sound of the band’s later work. It was the band’s most successful studio album, reaching No. 1 in the UK (for 3 weeks) and staying on the album charts for over a year. Although it only climbed as high as No. 53, Avalon is notable as the band’s only platinum record in the US.

A single, “More Than This,” preceded the album and was a Top 10 hit in Britain, Australia, and several European countries. The title track was released as the album’s second single and also became a UK Top 20 hit. A third extract, “Take a Chance With Me”, with a remixed version of album track “The Main Thing” on the b-side, reached the UK Top 30 and was Roxy Music’s last UK hit single to date.

Avalon was a huge hit for Roxy Music in 1982 and it is unfortunately the last album they ever recorded. The band has always had a considerable cult following, especially in Europe, but seldom achieved the commercial success of other popular bands. It seemed that the success of Avalon would ensure the band continued to reach for similar artistic and commercial achievements, but it never happened and Avalon stands as their final work.

“The Main Thing” is one of the lesser recognized songs on the album but it has always appealed to me due to it’s insistent and infectious groove…..the driving beat was close to the disco music popular in the day, but more sleek and sophisticated….the hallmark of all Roxy Music songs.

My original video for this track (#25 wow!) was a complete disaster…it’s long been a source of avoidance for me because it was just a really dark and ugly video. When I think about remaking some of my old stuff, “The Main Thing” is always one of the first that comes to mind….I always thought I’d just update what I’d done keeping the original concept (moonlight on the water, hearts, spinning “love”, and embracing couple art) with better, brighter result….I started with that video and began adjusting and in the end there was barely anything left of the original; (I guess I’ll keep my first effort up for awhile to link to the new one, but it really needs to disappear eventually; watch it if you dare https://www.youtube.com/watch?v=tXt1q-TXVZA

In keeping with my last double scoop for Yes’ “Soon” (Single Edit and Long Edit), I may also crank out an extended video for the 12″ version. Thanks for watching as always!

*** For those with an interest in multi-channel audio****
Avalon was one of the first SACD’s I bought when I got my SACD/DVD-A player and I loved what they did with the multi-track….wow, I wish there was some way for me to share that experience for the biggest fans of “Avalon” tat don’t have the capabilities….just something really special!

In 2003, Virgin reissued Avalon on Hybrid Super Audio CD with a new 5.1-channel surround sound remix by the original production team of Rhett Davies (the producer) and Bob Clearmountain (the mixing engineer). The original 1982 stereo mix is left intact and is the same for the CD layer and for the HD layer, allegedly being transferred from analogue master tapes to DSD and processed in DSD throughout the process. The surround part of the HD layer includes the full album in the original running order plus the bonus track “Always Unknowing”, whose original stereo mix is only available on CD on the 4-CD boxed set The Thrill of It All and in the 2012 Roxy Music Complete Recordings boxed set.

The guitar parts in “The Main Thing” and “Take a Chance With Me” are noticeably more prominent in the multi-channel mix than in the stereo mix. Guitar, saxophone, synthesizer, and percussion parts are often placed in the rear part of the sound field, while lead vocals tend to stick to the front centre, as opposed to being mixed in dual-mono in front left and right like in the somewhat traditional 2.0 stereo mixing. 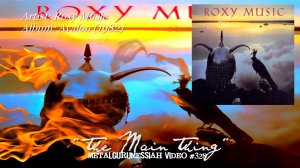 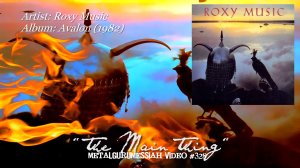 Surprised to find a video I’d made many months back for Bryan Ferry’s extraordinarily beautiful “A Fool For Love” (from 2002’s Frantic) had recently became available for viewing in the U.S.   The original video was blocked nearly everywhere when I uploaded it, and the only thing I could do to salvage the effort (for U.S. and other viewers at least) was to edit the video for his alternate take of the song….far inferior (though still very cool).

This obscure track is a standout by an artist who has produced many standouts!  Hope you enjoy the effort! 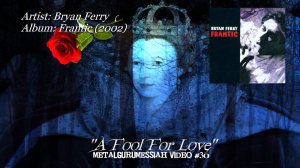