“Ship of Fools” was released at the end of February 1988 on Robert Plant’s fourth solo album, Now and Zen. It was my favorite tune on the record.

The video released for the song was a little drab and the audio from that video wasn’t too great. I added a little color to the video and synced to the best sounding source track I’ve ever heard…from a 24-192kHz flac rip from vinyl.

With a new band and a new perspective on his music, Plant returned in late 1987 with more of the sound that had previously defined him in Led Zeppelin. Although Plant continued to utilize computerized audio technology in a similar fashion to his previous solo albums, for this album Plant integrated the blues that had all but been abandoned on his most recent album Shaken ‘n’ Stirred (1985). A prominent guitar sound and an exotic feel to the recordings also marked another change in direction for the artist, who now added Middle Eastern tones in songs like “Heaven Knows”. This is a direction that he would eventually follow in the 1990s with Page and Plant.

The tracks “Heaven Knows” and “Tall Cool One” feature Led Zeppelin guitarist Jimmy Page. (On the liner notes, Page’s participation on the songs is noted with a Zoso symbol.) In response to the Beastie Boys’ unauthorized sampling of some Led Zeppelin songs on their 1986 album Licensed to Ill, Plant also used samples from Led Zeppelin songs (“Whole Lotta Love”, “Dazed and Confused”, “Black Dog”, “Custard Pie”, and “The Ocean”) on “Tall Cool One”, additionally singing words from “When the Levee Breaks”.

“Walking Towards Paradise” was originally a bonus track available only on CD versions of the album and as the B-side of the single “Heaven Knows”. Rhino Entertainment released a remastered edition of the album, with bonus tracks, on 3 April 2007.
In an interview he gave to Uncut magazine in 2005, Plant commented that “by the time Now and Zen came out in ’88, it looked like I was big again. It was a Top 10 album on both sides of the Atlantic. But if I listen to it now, I can hear that a lot of the songs got lost in the technology of the time.” 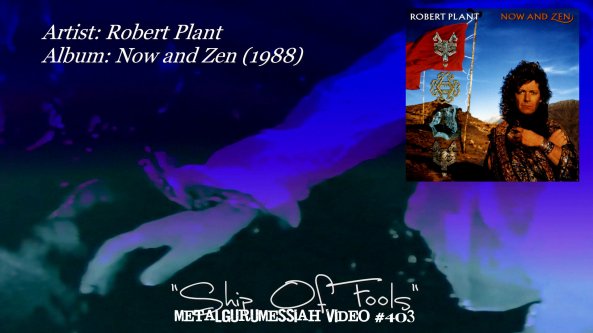