This is I believe the thirteenth video I’ve made for a George Harrison song (George must be the artist I’ve made the most videos for!) and the second from the 1979 album….after “Your Love Is Forever” https://youtu.be/pY9TX_Q7j-o

A new George Harrison album was always an exciting and memorable event when I was growing up and each one (as with the other Beatle solo albums) brings distinctive memories of very specific times, places, people and emotions of my youth. I had been in awe of George’s previous album, 33&1/3 and was thrilled to finally hear that he had a new album. It was my last year of high school and I took a friend along with me hauling some cattle to a ranch near Corpus Christi for my dad on a Saturday. I was more than happy to make the trip because I knew it would allow me a chance to get into a city to a record shop and pick up George’s new album. Though the trip wouldn’t normally take me thorough San Antonio, I made a detour to the route and picked up both the album, cassette, AND! a great promo poster for the LP (In those days I was very skilled at convincing record store employees to give me promo material! LOL!, of course once I started working at one the next year such material became much more available and….yes, I still have that poster!). To this day every time I listen to this album (which is often, btw) I think of the hassles of driving that cattle trailer through the city and then happily listening to this album on cassette with my friend as I winded through the Texas countryside with the blue sky, white puffy clouds and sunshine above us!

From Wiki: With Harrison’s penchant for leisure and travel following Thirty Three & 1/3’s release, he had not started recording a follow-up until mid-1978, although he had been writing songs during his hiatus. Teaming up with a co-producer for the first time in years, Harrison decided to use Russ Titelman to help realise the music for George Harrison, which was recorded at his home studio, entitled Friar Park, with string overdubs being effected at London’s AIR Studios. Special guests included Steve Winwood, Gary Wright (who co-wrote “If You Believe”) and Eric Clapton.

The album was previewed by the single “Blow Away”, which reached No. 51 in the United Kingdom and No. 16 in the United States. George Harrison received positive reviews upon its February 1979 release. It reached No. 39 in the UK and it peaked at No. 14 in the US, going gold. “Blow Away” as a single was also successful in Canada, peaking at No. 7 on the singles chart. Harrison’s increasing efforts, however, were being directed towards the film industry, having formed Handmade Films in order to help his friends in Monty Python complete Life of Brian.

Three of the songs from the eponymous album were included on Harrison’s Best of Dark Horse 1976–1989 compilation: “Blow Away,” an edited version of “Here Comes the Moon,” and the single edit version of “Love Comes to Everyone.” “Blow Away” was also included in the career-spanning compilation Let It Roll: Songs by George Harrison.

In 2004, George Harrison was remastered and reissued both separately and as part of the deluxe box set The Dark Horse Years 1976-1992 on Dark Horse with new distribution by EMI, adding the bonus track demo version of “Here Comes the Moon”, recorded just after it was written in Hawaii.

Till next one…..hope you enjoy this one! Thanks for sharing your joy of music with me!

As always, HUGE THANKS to everyone who’s art made this new art possible…THANK YOU!!!

[Lyrics]
Day turned black, sky ripped apart
Rained for a year ’til it dampened my heart
Cracks and leaks
The floorboards caught rot
About to go down
I had almost forgot.

Sky cleared up, day turned to bright
Closing both eyes now the head filled with light
Hard to remember what a state I was in
Instant amnesia
Yang to the Yin.

Wind blew in, cloud was dispersed
Rainbows appearing, the pressures were burst
Breezes a-singing, now feeling good
The moment had passed
Like I knew that it should. 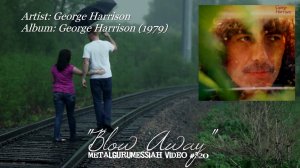